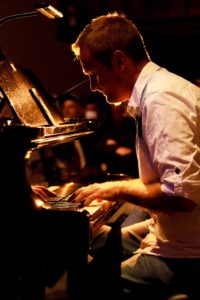 Daniel Greco Costa was born in 1989 in London (UK) to an Italian and Portuguese family. He initially studied classical piano for six years at the Académie de Musique Rainier III in the south of France, as well as jazz, and wrote his first composition at the age of twelve. In 2010, he was awarded a diploma with merit at Sir Paul McCartney’s Liverpool Institute for Performing Arts in the UK, but his strong interest in his Latin roots coupled with his passion for jazz led him to study at the Escola Superior de Música e Artes do Espectáculo in Portugal, where he graduated in jazz piano with a Rotary Club award for outstanding achievement in 2015. During his course, he was also awarded a merit grant to study Brazilian music at UNICAMP – Universidade Estadual de Campinas (São Paulo, Brazil). He pursued further studies at Berklee College of Music with a scholarship for outstanding achievement.

During his studies, he attended workshops and classes given by artists such as Gary Burton, Kevin Hays, Scott Colley, Kurt Rosenwinkel, Jorge Rossy, Chick Corea and César Camargo Mariano. He has co-directed musicals, performed with orchestras and big bands, and starred as both a pianist and composer in projects in countries such as the UK, France, Finland, Germany, Spain, Greece and the USA.

In January 2016, he recorded his debut album Suite Três Rios in Rio de Janeiro, Brazil, with musicians such as Jaques Morelenbaum, Ricardo Silveira, Teco Cardoso, Rafael Barata, Marcos Suzano and Leila Pinheiro. It peaked at #1 on the iTunes Jazz Chart and Top 10 across all genres in Portugal, prior to hitting the #1 slot on the CMJ Top Adds Chart in the USA and being top 10 for several weeks on Roots Music Report. One of the best albums of the year for Down Beat Magazine, it achieved rave reviews from countries such as the USA, Russia, Canada and Brazil.

In May 2018 he recorded his new album Skyness at Arte Suono in Italy, featuring Bossa Nova icon Roberto Menescal, Jorge Helder, Teco Cardoso, Custodio Castelo, Romero Lubambo, Nelson Faria and Seamus Blake, released at Blue Note Rio in November with Menescal and Faria. The track "Compelling" was featured by JAZZIZ Magazine on their Summer 2019 Album. His tour took him to countries such as the USA, Italy, Malta, Greece, Egypt, Turkey, Brazil, Armenia, Cyprus, Portugal, Spain, Lebanon and India, where he was interviewed and featured by Rolling Stone Magazine. In 2020, he recorded the single Love Dance with Ivan Lins and released his first solo piano and live album Live in California, recorded during the final stage of his international tour. It came in second on Roots Music Report's Top Latin Jazz Album for the year of 2020 Chart and was praised by several critics.

In 2022 he released the single Iremia with Randy Brecker as a message of peace. He also recorded his new album Beams in Brooklyn, New York City, with Dave Liebman, John Patitucci, Mike Stern, Hermeto Pascoal, Dave Douglas, Teco Cardoso, Paulinho Vicente and Anne Boccato. After releasing his new album in 2023, he appeared on the cover of Brazilian keyboard magazine Teclas e Afins, while his collaboration with John Patitucci was featured by American Bass Magazine.

"Keep doing what you're doing man. It's awesome!" - Mike Stern

"Shows a great depth in his musicianship" - Dave Liebman

"I really enjoyed your musicality, refinement and compositional style. I feel proud to be able to collaborate on this touch of beauty that is given to the world and its people"

"Dan Costa is one of those jazz and bossa nova greats spread all over the world, standing for our good music. It was a pleasure to play with him"

"A sweet, beautiful, translucent sound of rare beauty and a technical fluidity that never hinders the musical narrative... extremely necessary poetry to calm down the turbulent days we are living"